Welcome to your journey into our education setting

Imagination: the cornerstone that brings healthy, happy engagement and interaction in any education setting with Philips professional displays 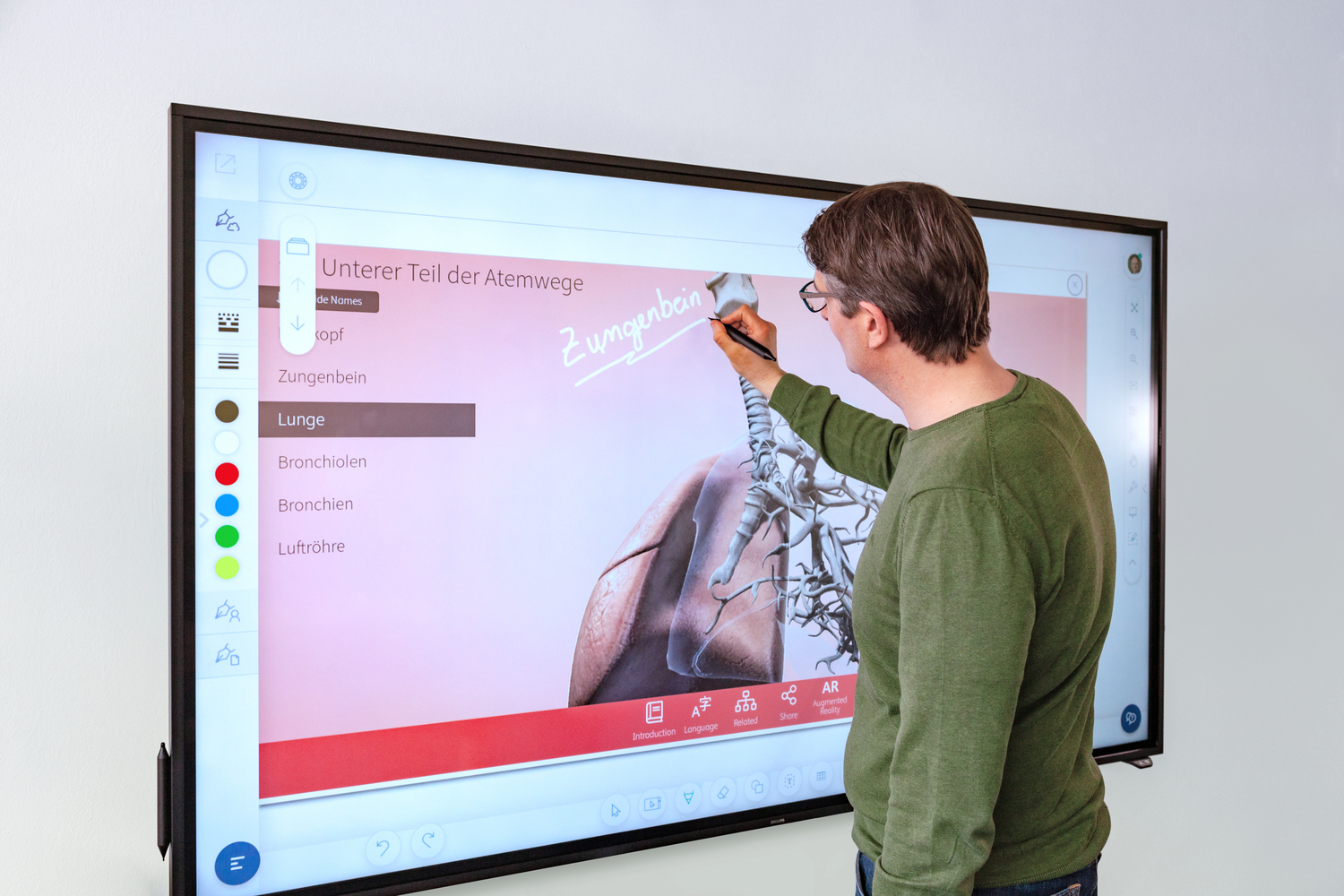 Discover a display portfolio that extends across the whole campus

Welcome to your PPDS education theatre guide. Here, you will find all the information you need to immerse yourself in our portfolio of Philips education display solutions and to help you navigate through our Philips stand 3Q600 at ISE 2022. 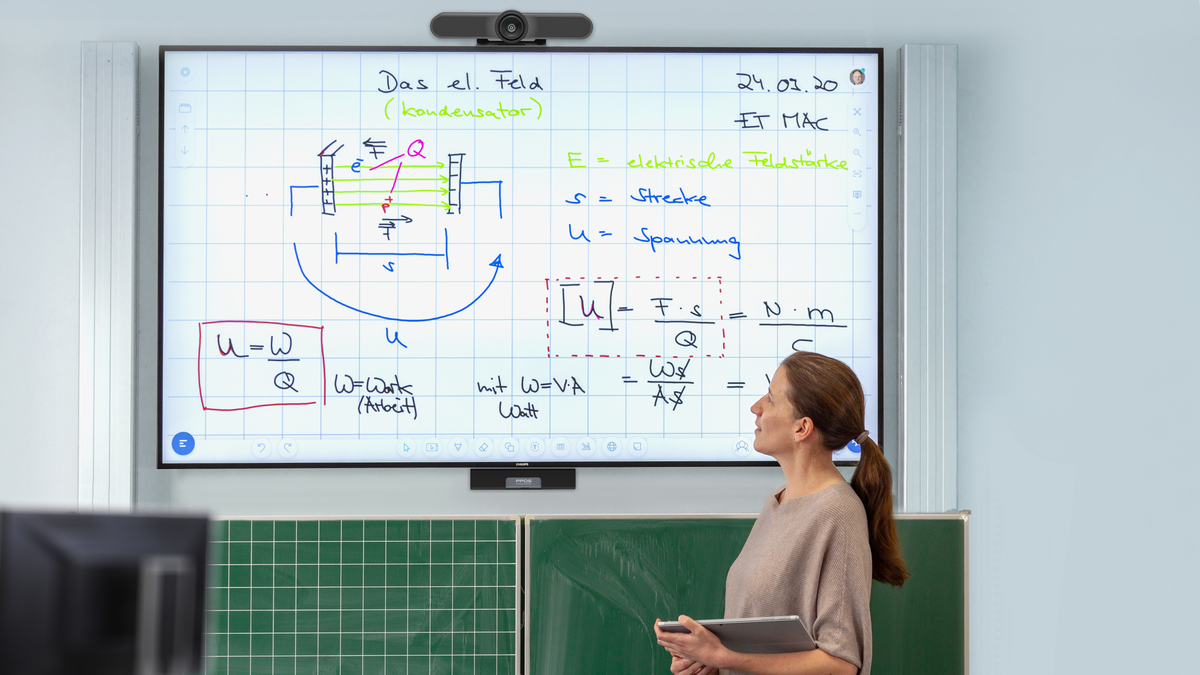 Meet the team - your PPDS education hosts for ISE 2022

This guide will help you to make the most of your time on our stand. And it will be available for you to collect all the data you need after the event, as well. At PPDS we like to make it personal, though, so please do come and find out more from us.

Headed here at ISE 2022 by Patrick VanTreese, Education Sales Manager NA, our team is on hand to support you while you’re in the education zone. 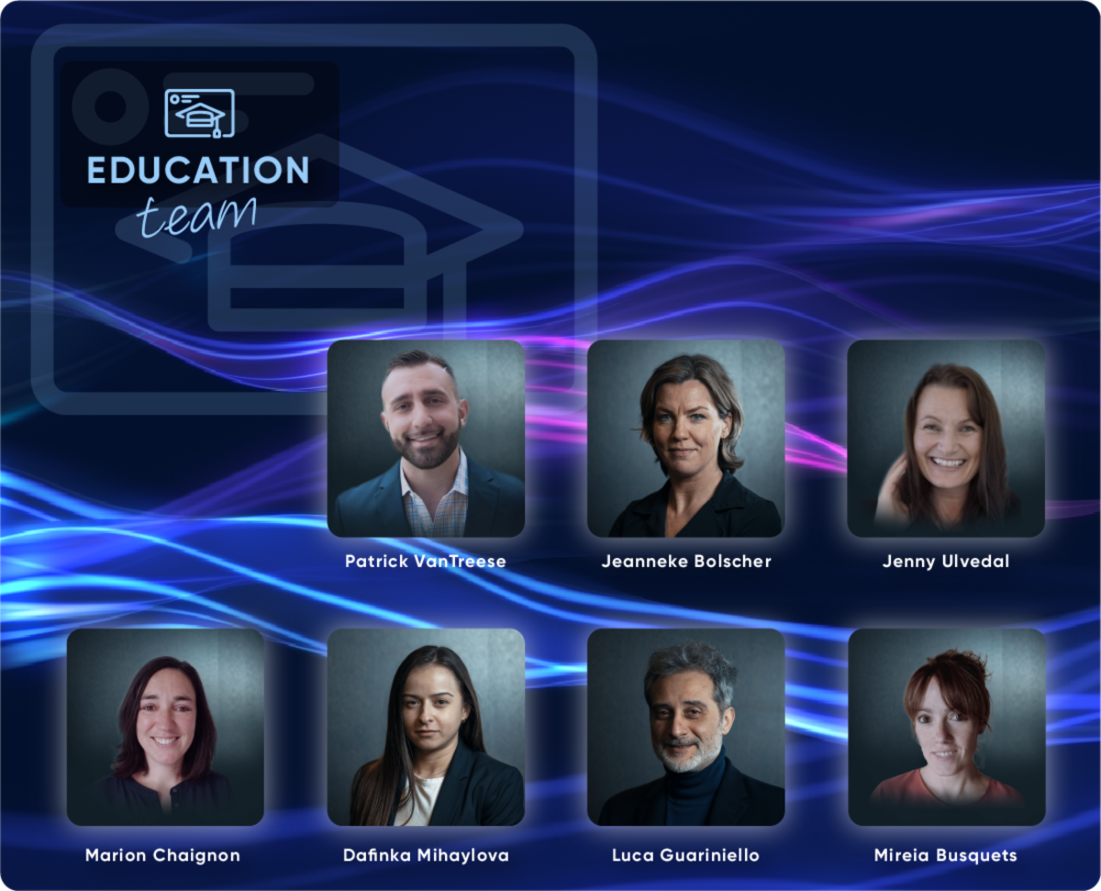 From nursery through school to university and beyond, in the classroom and across the campus. The Philips education portfolio caters for your visual demands. And together with our partners, you’ll find our proven, ready-to-sell solutions can be seamlessly integrated for intuitive and easy experiences everywhere. Start your journey through our education displays here…

Our solution is brought together on an 86" Philips 86BDL3052E and 75" 75BDL3052E, with i3 LEARNHUB – delivering active and interactive learning possibilities, and curated content – and an electrical height adjustable mount from Vogel’s and SmartMetals. You can also discover a Logitech camera for distance learning, and a PPDS Air Quality Sensor to help ensure healthier classroom environments here. 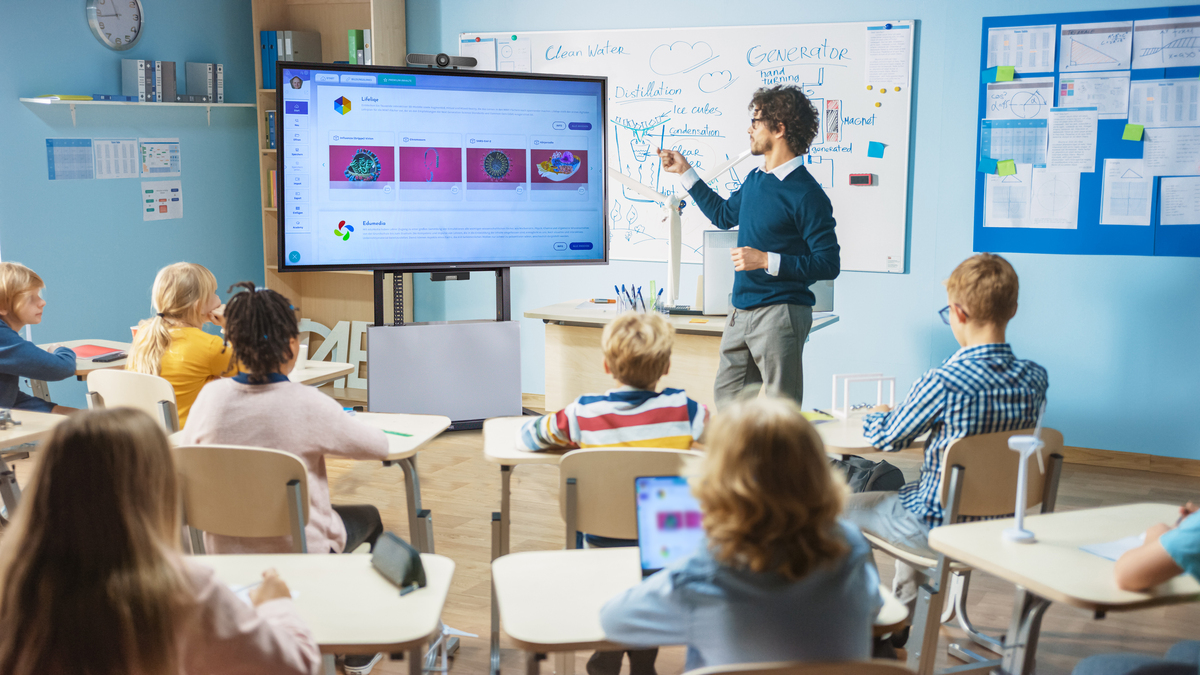 The demand for distance learning is no longer confined to open universities and professional qualifications – it’s stepped into the mainstream school system too. The Philips display portfolio extends with our range of monitors – stylishly designed and rich with features to fit any user’s needs – delivering the ability to seamlessly share learning from the classroom for students working elsewhere.

Our solution is brought together on a Philips 65BDL3652T including i3 LEARNHUB, on a Vogel’s mount. linked via PPDS Interact wireless screen sharing to Philips 24" 242B1TC and 27" 276B1JH monitors.

For lecture theatres, auditoriums, sports halls and stadia, bigger always makes for a better experience. With direct view LED, size presents no boundaries and whether you would like to fill a small space or a massive expanse of wall, students will be engaged and inspired with highly visual, high definition content. Colour, contrast and quality are all taken care of in the Philips DV LED range, and with efficiency always on our minds, you can be assured of the lowest energy consumption on the market with our 7000 Series.

Our solution here is brought together on our newly launched at ISE 2022 Philips 27BDL6115L 6000 Series LED display, mounted with Vogel's, and linked together with a Philips 86BDL3052E and a Philips 10BDL4551T.

The Philips 6000 Series DV LED is newly launched at ISE 2022. This highly versatile LED display range brings quality together with safety and efficiency – ideal for use in education settings and answering the demands of today’s rigorous tender requirements. 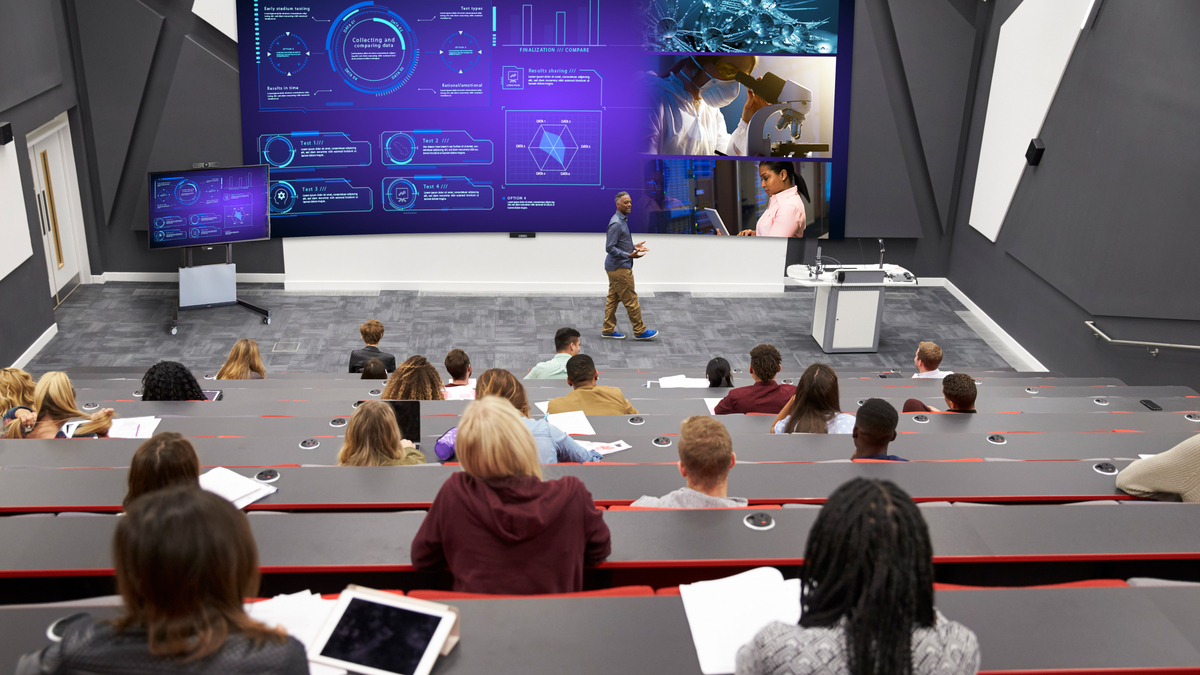 Complementing and seamlessly integrating with classroom displays, our across campus portfolio includes digital signage, ideal for information, wayfinding, presenting and more, and professional TVs, perfect for use in student accommodation and filled with features – including Chromecast built-in and access to Google Play Store – to bring the comfort of home to college living.

Whether for classrooms and lecture theatres, study booths or medical rooms, offices or meeting rooms, automating room booking brings visibility together with planning to ensure the right people are in the right places, with the equipment they need to deliver best-in-class experiences.

Our solutions here are brought together on our 75" Philips 75BDL4550D and 55" Philips 55BDL3550Q digital signage displays with content connected with solutions from NowSignage, as well as our 10" Philips 10BDL4551T touch screens, working with GoBright room booking software. You will also find a PPDS Air Quality Sensor, and a Luminaire from Signify here, helping to keep the classroom air healthy. 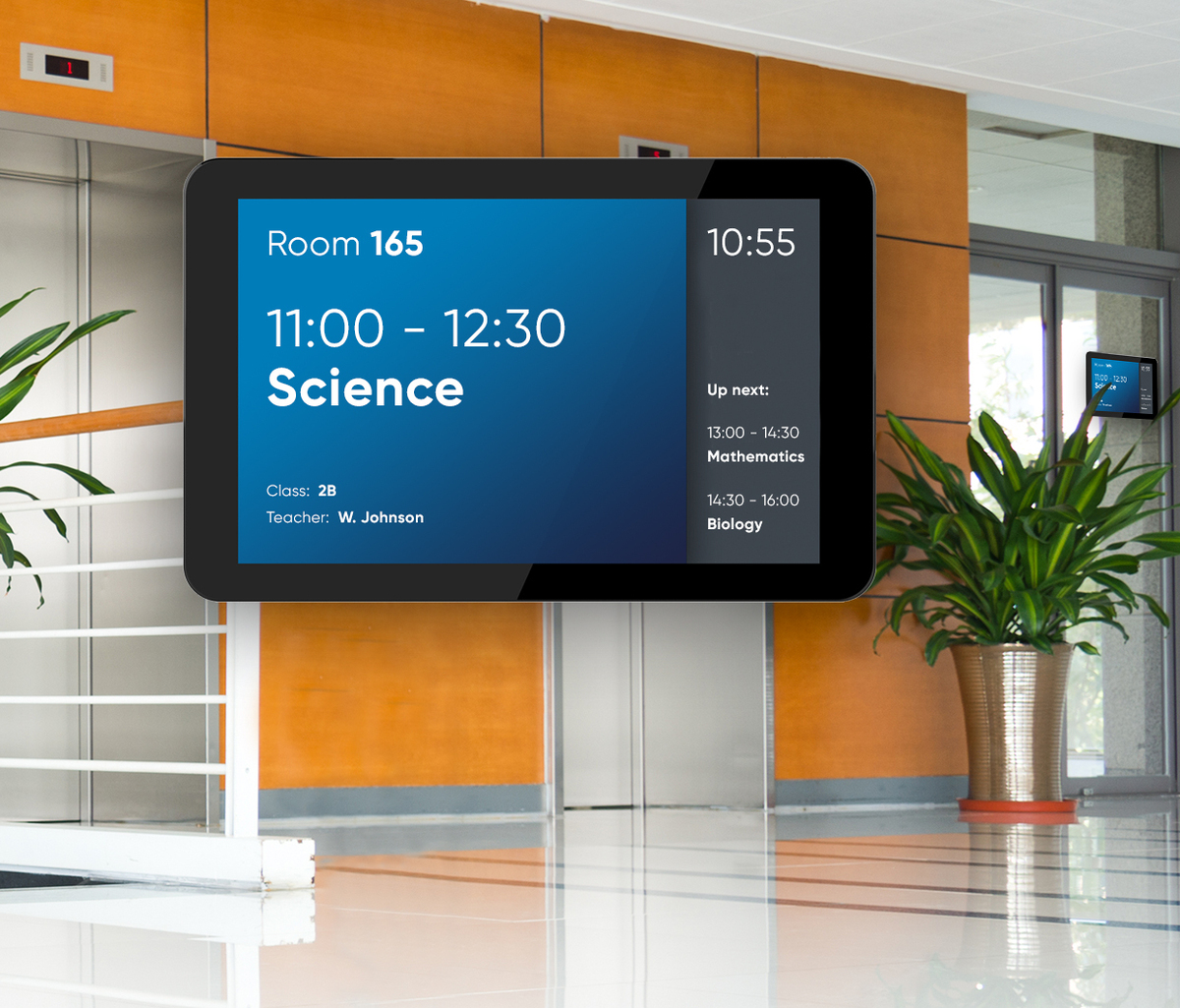 A Greek philosopher who made important developments in mathematics, astronomy, and the theory of music. His theorem – now known as Pythagoras' theorem –shows how the sum of the areas of three intersecting squares can determine the side lengths of a right triangle. This may well have been known to the Babylonians thousands of years earlier, but Pythagoras was the first to prove it.

Scientist, mathematician, physicist, engineer, astronomer and inventor – Archimedes is often known as the Father of Mathematics. He is generally acclaimed as the most famous mathematician and inventor in ancient Greece. He is especially important for his ‘Eureka’ moment – his discovery of the relation between the surface and volume of a sphere and its circumscribing cylinder.

Historians treat Horace Mann, born in Massachusetts, US in 1796, as one of the most important leaders of modern education reform. An American educational reformer, he is widely credited for today’s version of the school system. Arguing that universal public education was the best way to turn unruly children into disciplined, judicious young people, Mann won widespread approval for building public schools.

Welcome and enjoy your visit!

Please find out more from us. Our team is on hand to support you while you are in the corporate zone. You're more than welcome!